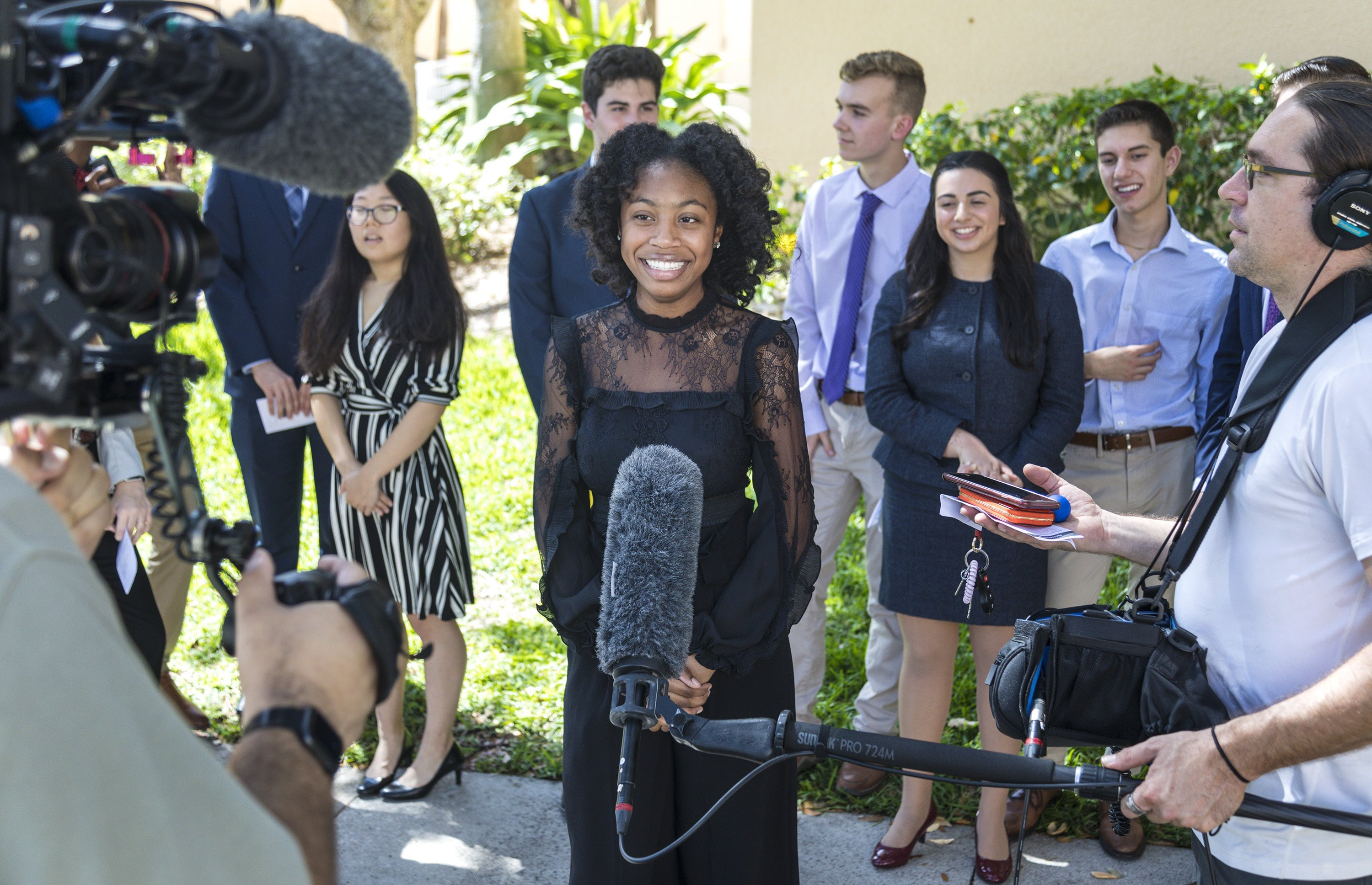 Maliyah White, 18, of Dreyfoos School of the Arts, is recorded for a Pathfinders video March 4. [LANNIS WATERS/palmbeachpost.com]

More than 500 of the region’s standout high school seniors wrapped all of their academic, artistic, athletic and civic accomplishments into packets just months ago and asked to be counted among the Class of 2020′s elite — to be named a Pathfinder.

Then, just weeks after being grilled by judges in their respective fields, a pandemic swept the globe, pitching their proms, canceling their celebrations and forcing their graduations to be recast for video viewing.

The 37th annual Pathfinder Scholarship Awards ceremony had to switch gears as well.

Since their inception, the awards sponsored by The Palm Beach Post have celebrated soon-to-be graduates from Palm Beach and Martin counties, handing out more than $3.2 million in scholarships to more than 2,450 students.

This year, 54 students earned first, second and third prizes in 18 categories, laying claim to $171,000 in scholarships.

While there was no red-carpet or Kravis Center stage moment, the Pathfinders recognized Wednesday during an online broadcast have proved they can power through the difficult and make hay of most obstacles.

Olympic Heights student Francois Khouri survived a childhood punctuated by missile strikes in Syria, fueling a curiosity about political science. His pursuit landed him internships with both the Florida Democratic Party and two local Republican congressional campaigns. Winner in the category of History and Political Science, Khouri is sharing his passion with thousands of YouTube viewers a month through his Political Discourse for Dummies channel.

Repeated family visits to India exposed Science winner Rohan Jakhete to the scourge of poverty and water insecurity. As a student at South Fork High, he developed tools — one patent pending — to purify the polluted and manage the meager. He’s the founder and CEO of two start-ups.

The intersection of invention and water also paid off for Sophia Lloyd George. The Oxbridge Academy student’s work to translate data from the U.S. Army Corps of Engineers and her use of crowdsourcing to map algae caught attention in the Computer Science category.

But her resume, too, is girded by success over adversity. Inspired by an older brother with autism, Lloyd George convinced doubting adults to let her teach computer science to children with the disorder. Her nonprofit, Code Autism, was further propelled by a $14,000 grant.

Park Vista High’s Noah Cabarcas was just looking for fun when he turned learning a new language into a sport with young friends: Who can master another tongue in the shortest amount of time?

But as others lost interest, Cabarcas found new purpose, seeking to better connect with his best friend, a transplant from Brazil.

Tapping YouTube, Duolingo and the international pop music scene, Cabarcas cracked Portuguese well enough to chat with his friend’s family in eight months. He went on to master Italian — that’s what you do when family arrives from Italy for the summer. And French — it began with a class and then took off when a student from the country arrived on campus. The Pathfinder in Foreign Language also speaks Spanish and is chipping away at Japanese and Russian.

“It’s heartening and inspiring to know that our Pathfinders have the qualities that will enable our country not only to emerge from today’s unprecedented crisis, but be better prepared to face similar challenges in the future,″ Palm Beach Post Executive Editor Nick Moschella said. “They are leaders and scholars, driven to succeed and serve their communities with compassion and vision.″

The credentials amassed by this year’s Pathfinders would be the envy of most adults.

In addition to building academic transcripts that rarely, if ever, see anything below a B, they are the editors of their school newspapers and yearbooks; they lead debate clubs, language clubs and clubs for computer coding. Dreyfoos School of the Arts student Elizabeth Sinn has placed second in the Steinway Junior Piano Competition for two years running. Her classmate, Jacqueline Kaskel was a semifinalist in the New York Lyric Opera Theatre Competitions. Jensen Beach High student Sandra Edwards played in the women’s under-19 lacrosse world championships (as a recruit and leader for a nascent Team China, thanks to a grandfather’s bloodline).

Even their spare time is superlative-worthy. Among them, they hold black belts in taekwondo, teach chess, play performance level harp.

And they aspire to do so much more.

At Glades Central, Fabio Louis will be the first in his family to graduate high school and is poised to have his associate’s degree in hand by December. The grandson of Haitians who raised cattle and banana trees and the winner in the Vocational Education category, Louis has set his sights on the science of agriculture. He wants to help solve world hunger.

Maliyah White, 18, of Dreyfoos School of the Arts,